It’s been a while coming but the release of Puzzledorf is finally approaching. After unexpected delays with coronavirus, game development taking longer than expected, etc, we are finally here. I want to talk a little bit about the game and it’s design, as well as release news.

The game is currently in the final stages of testing, planned for release in 2021. And then on to the next exciting project! And I do indeed have plans for that. There will be a game trailer released soon, and I will announce when the Steam page and other store front pages are up so players can wish list the game.

At the bottom of the article is more artwork from the different worlds in the game.

Something I’ve really tried to hone in on with this game is exploring, “What makes a good puzzle?”

Part of the fun will be you experiencing it for yourself, but the result is puzzles that look clean and simple, where you think to yourself, “I can do that!” but then realise the puzzle is more challenging than it appears.

One thing I noticed with many other puzzle games, is that if there is too much happening on the screen, too many elements, too much for the player to take in at a glance, people just put up their hands and say, “I’ve had enough, this is too hard for me.” When in fact often it is not that the puzzle was too hard, but that it was most likely overly complex and not designed as well as it could be.

Another bad habit a lot of puzzle games also get into is getting too hard, too quick, leaving behind others who are either new to the genre, or casual puzzle players wanting to have a go. By gradually increasing the difficulty at the right level, teaching players through design and introducing new types of problems to solve at the right place, any player can get in and have a go, but everyone will have to work hard to win.

As a general rule, a puzzle should be clean – a single puzzle, not a collection of multiple smaller puzzles. The problem should be clear at a glance, with potential solutions occurring to the player where they feel like they can have a go. Not relying on adding lots of elements to increase complexity, but instead requiring more complex thinking. You make the player work and think hard, but if you are teaching through design and increasing difficulty at the right pace, they are having so much fun they don’t realise how hard they are working! That is the beauty of it.

But enough puzzle design. Below is some of the artwork from different worlds in the game.

Above is a zoomed in screenshot, not the whole screen. On PC, a full screenshot will look like below in HD:

Here is some more zoomed in artwork:

I will announce further news, of the definite release date, game trailers, and when the store pages are up soon. 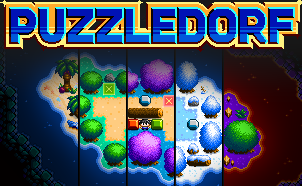