Through making a number of games I learned a lot of techniques to make my projects run faster in Fusion. This guide will share what I know.

NOTE: You do not have to do all of these things in each project in Fusion. These are simply ways that you can make a game run faster if you are experiencing performance issues. This is most likely to occur in mobile games that have lots of onscreen action and object creation. For something like a puzzle game, there should likely be no problems. Take this as a, “If you need it, it’s here” sort of guide.

Before reading this article it helps to understand what we mean when we use the word “optimise”. To optimise your game means to make sure it runs at it’s best, possible performance. There are a few key areas that will affect this more than others:

When your game runs, it is set to run at a consistent frame rate, eg 60 frames per second, or 60fps. That means your game will attempt to process everything you’ve told it to do, 60 times per second. What we want to do is limit how much the computer has to do every frame, every second, which in turn will speed up your game. This guide will cover that process.

Object Creation vs Having a Pool of Objects

In my experience, Active Objects and graphics are usually the biggest cause of slow Fusion games. Creating objects at run time is a big one that uses a lot of memory. The more objects you create at one time, the more memory you are using up. The bigger the objects, the more memory you use.

A very good solution is to create a pool of the objects that you wish to reuse. For example, say you wish to create a fireworks particle effect. You would create the necessary number of particles at the start of the level, and then when you need to use them, you move their position to use them, instead of creating new particle objects.

Any time you are creating objects or particles at run time, especially lots of objects, consider if it might not be better to pre-create them at the start of the level off-screen to use them later. At some point there might be a trade off though for how many objects you have offscreen, because each object uses up memory. This will be a case by case scenario that you might just have to test.

Remember that when a game runs, the device attempts to read and calculate every line of code, 60 times per second. Now, the amount of lines of code isn’t necessarily as important as what the code is doing. One of the biggest drain on computers is when it has to perform calculations, like checking collisions, running loops, calculating physics, etc. By limiting the amount of calculations the computer has to perform, per frame, per second, you are requiring the computer to do less, which speeds up your game. The simplest way to do that is deactivating groups that aren’t necessary at that particular moment in time.

Code within inactive groups will not be read at run-time, until they become active, which speeds up your game. The more code you can deactivate when it’s not used, the less calculations the computer has to do every second. 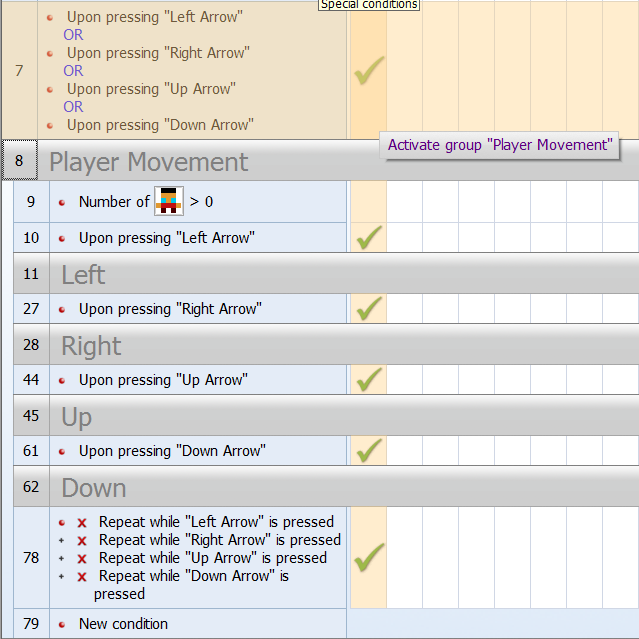 Be wary of using the always event. Always means Fusion attempts to run that line of code every frame, every second, so at 50fps, that line of code is run 50  times per second. If you need to use it, that’s fine, just be aware of how it behaves and make sure it’s the best way to achieve your result.

The bigger an assets files size, like music files, the slower the game will run because it has to hold it in memory. To use MP3’s you may have have to pay royalty fees, but you can convert a WAV into an OGG file with the free program Audacity. OGG’s are free and much smaller than WAV’s.You should be able to use them on Android or iOS as well as PC.

It is common practice to keep active objects or counters off-screen to store variables. If you make them invisible by unticking ‘visible at start’, you will use less memory

Two of the following settings I have labelled ‘Last Resort’. They modify a projects colours. They are not necessary, and may throw off your graphics original vibe, but if you have tried all else and still need to squeeze out some performance, changing them can make a big difference.

Variables
An article on effective use of variables

Other links:How to work out if an image is to the power of 2
Further tips on optimization

14 thoughts on “How to Optimise your Fusion Game”